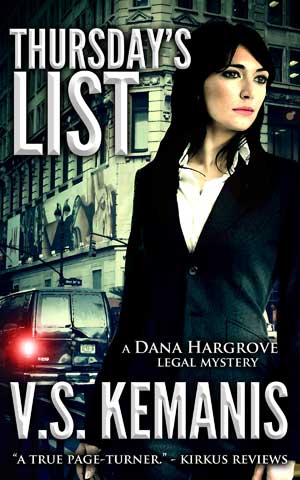 Just months on the job, rookie prosecutor Dana Hargrove is faced with an impossible choice between her career and personal relationships. It’s 1988, at the height of Colombian cocaine trafficking in New York City, and Dana has been assigned to a team investigating money laundering by the Cali Cartel.

Dana isn’t happy with her assignment. As the junior member of the team, she’s handed nothing but grunt work, analyzing bank records. But in the course of tracing the flow of dirty money, Dana unwittingly stumbles upon alarming evidence that threatens a close friendship. Left out of the loop by her superiors, she undertakes her own investigation and connects the dots between ambiguous clues. In a few dark days and sleepless nights, Dana questions her loyalty to friends, her employer, and the ethical code she is bound to uphold. As the investigation unravels, Dana and her friends are thrust into a living nightmare of Cartel greed, blood, and retribution.

Thursday’s List explores questions of professional integrity, the insidious influence of cultural biases, and the triumph of personal bonds of friendship between two unforgettable women.

Right outside the store a small crowd was gathered, a few dozen spectators immersed in rapidly flowing Spanish. Something is wrong, she heard Melly say.

Heart pounding, Dana started to push through. She halted with an urgent desire to turn and run. What was this? She hadn’t the time to think. Something bad had happened, causing these people to stop and gawk. An accident, a fire, a robbery? Was Noel all right? But her immediate impulse was one of self-preservation. She was tied up in this somehow, she didn’t know why or how, but there was something waiting for her on the other side of this crowd.