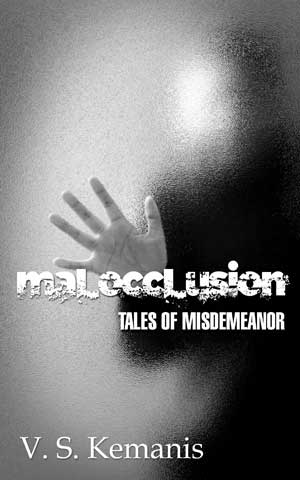 Tempting little wrongs, moral dilemmas, sub-conscious desires. Blinded by self-deception, even the best of us are led astray.

In Malocclusion, tales of misdemeanor, V.S. Kemanis tells fourteen compelling stories that prickle with suspense and psychological intrigue. A private investigator is double-crossed by the woman he’s tailing. A suburban homemaker commits an unspeakable transgression against a new neighbor. A man’s aesthetic fascination with a young girl crosses the line. An orthodontist makes a shameful self-discovery while treating an adult patient.

Enter a world that’s slightly askew, driven by aberrant need, where you’ll encounter familiar misdemeanants from every walk of life and their unwitting—or complicit—victims.

He had always supposed that some people might find what he did objectionable or wrong, even illegal. “You don’t understand,” he told her softly.

Karen merely nodded a hello, feeling slightly apart despite the utter normalcy of the morning, feeling, for the first time, that she belonged to a secret, shameful society ruled by aberrant desire and behavior.

Pain was always involved—a criticism of his profession, that thoughtless question to which he was acutely sensitive: Do you actually enjoy this infliction of pain?

A block ahead of them, at the front of the crowd, a swarm of uniformed officers in riot gear bore down on them, wielding bats and cocking rifles as their captain made demands by megaphone. This was no demonstration but the beginning of a melee.